On the Road Again: Exploring the Lifestyle Effects of Business Travel

Business travel is a big deal in the United States. In 2018, Americans took more than 460 million domestic work trips! Whether they travel via plane, train, or automobile, people’s jobs take them across the country— and the globe — for all kinds of reasons. Does your company host an annual summit? Are you closing a deal with a major foreign client? Do you have an important meeting and don’t want to deal with dicey video call quality? Business travel can save the day.

Against the backdrop of a very poor work-life balance in the U.S. (it placed 30th out of 38 countries, according to the Organisation for Economic Co-operation and Development), people were surprisingly enthusiastic about spending time away from home for work: 62% said they found traveling for business enjoyable, and 90% wanted to continue doing so for the remainder of their career.

But how does all of this affect home life, sleep, and overall job satisfaction? We surveyed 867 Americans to find out. On average, respondents spent 22 days per year traveling for business over nine separate business trips, with the average trip spanning 3.8 days. 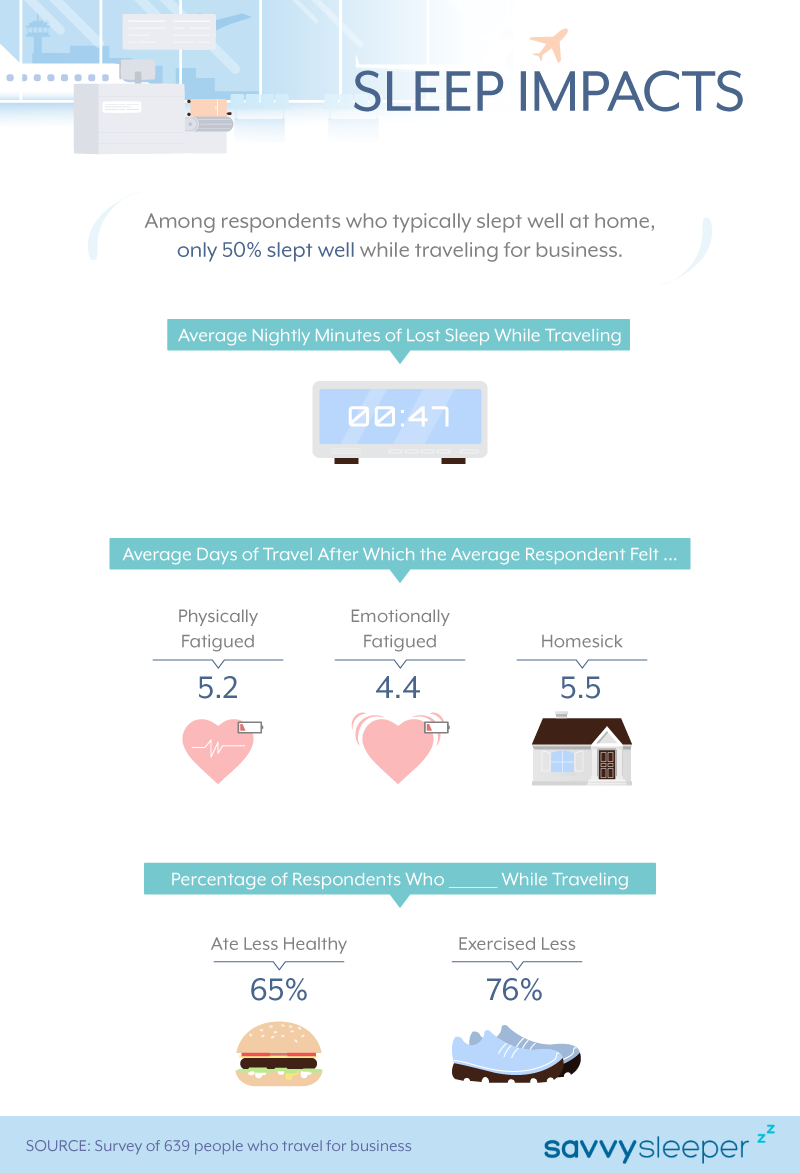 Business travel is great for exploring new places without having to fund the entire trip yourself— but it’s not so great for restful sleep. Among those who typically had no trouble sleeping well at home, only 50% could say the same about their snooze quality during business-related travel. This discrepancy may be due, in part, to something called the “first night effect,” during which our brains take in their new environments and, therefore, rest less soundly. Experiences like staying in a hotel room or sleeping over at someone’s house can trigger this effect.

As a result of those interruptions, travelers lost an average of 47 minutes of sleep per night while on the move. By day four of travel, the average person felt emotionally fatigued (experienced by 62% of respondents), and by day five, they also felt physically fatigued and downright homesick (experienced by 67% and 65% of respondents, respectively). No matter how many days they spent traveling every year, most people felt more or less the same when they returned.

Shifts in routine can often create a domino effect, and being far from home in a different city is often a gateway to unhealthy habits. For example, if you’re living out of a hotel room with no kitchen or limited supplies, you’re not likely to be cooking for yourself. Perhaps that’s how 65% of respondents ended up eating less healthy while they traveled. Another 76% exercised less while traveling for work.

For an in-transit health boost, try packing your own snacks, bring along a reusable water bottle, and commit to eating veggies with every meal. A little effort can go a long way. 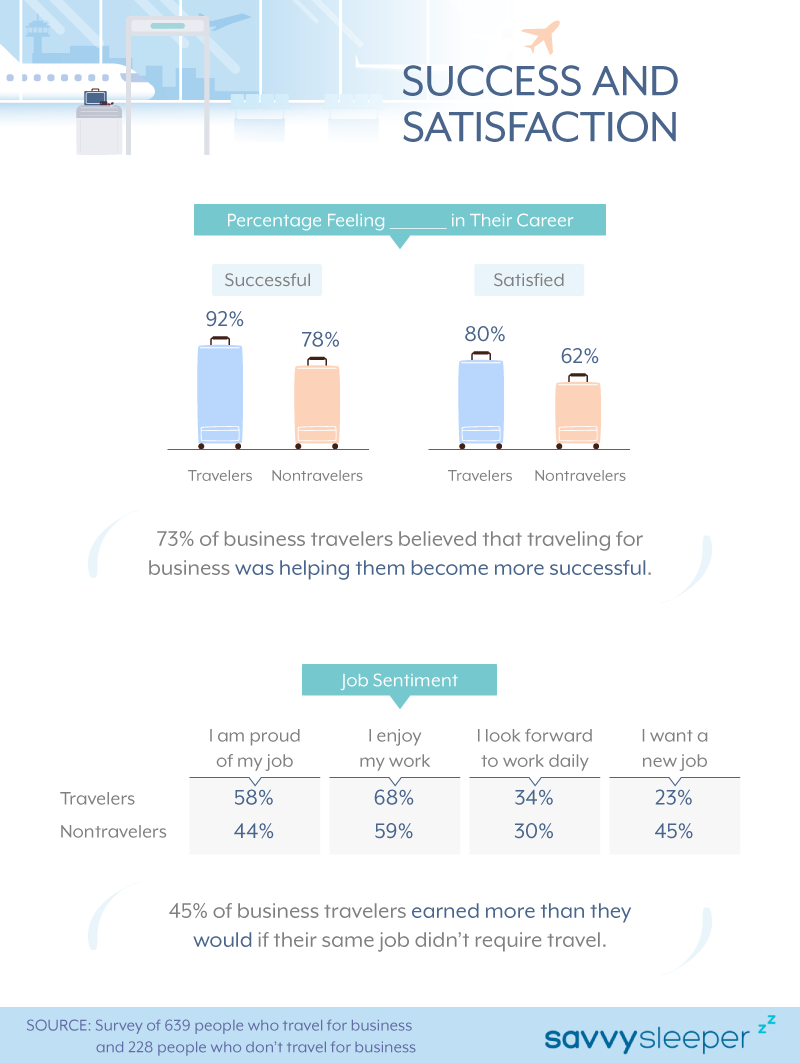 Career fulfillment is complex, and achieving it can require some serious self-examination. If you’re drawing a blank, consider this result from our survey: While business travel wasn’t exactly a beacon of health, people who had the opportunity to do it were universally happier with their work life. Travelers felt more successful (92% versus 78%) and more satisfied (80% versus 62%) in their careers and were three times more likely to say they were “very successful” compared to nontravelers.

Our survey even revealed a certain “happiness hierarchy” among the traveling population: People who spent more days on the road felt more satisfied in their careers and more successful overall compared to those who spent less time working on the move.

Respondents whose jobs took them around the world (or at least their state) were also more likely to express sentiments like “I am proud of my job,” “I enjoy my work,” and “I look forward to work daily.” Meanwhile, nontravelers were almost twice as likely to want a new job.

These benefits aren’t necessarily accessible to everyone, though: 66% of business travelers held either managerial or supervisory positions, as opposed to entry-level roles. Getting to travel for work may be worth the extra effort it takes to land these positions, though– 45% said they earned more than they would if their role didn’t require being on the road. Maybe those sleepless nights are worth it after all.

When you’ve depleted your in-transit entertainment options, there may only be one thing left to do if you’re stuck on an airplane (besides sleep): work. Just over 60% of business travelers said they had knocked out some work while in transit, and 84% had worked atypical hours while traveling.

Despite the typical frustrations that are par for the course while traveling (for example, 24% of respondents experienced problems like delayed flights or hotel issues), a majority was able to complete all of the things they needed to get done while they were away. For some, though, that achievement came at a cost: Of the 84% who were able to conquer their to-do list, nearly half said doing so was a bit of a struggle. That’s why you shouldn’t overlook planning ahead to maintain your productivity while on the go!

Despite a few bumps in the road, most people were able to maintain their baseline level of productivity and focus while away from the office. For another chunk of respondents, something about experiencing a change of scenery actually worked to their advantage! Forty-nine percent reported being more focused while traveling, and 37% experienced heightened productivity.

Compared to just a few decades ago, women have greatly expanded their presence in the workforce. However, compared to men, they still face a disproportionate amount of pressure to be an involved parent. In a recent Pew Research Center study, 77% of respondents felt women experienced more of this pressure, compared to a lesser 56% who felt the same way about men’s roles as fathers.

It’s no surprise, then, that women in our survey were more likely to feel that business travel hurt their ability to parent (42% of women versus 34% of men). They were also less likely to feel like it had no effect whatsoever (25% of women versus 35% of men); however, it is important to note that a slightly higher number of women actually said travel had a positive effect on their parenting compared to men!

On the whole, 53% of mothers and 43% of fathers said they weren’t able to spend as much time with their kids as they would like due to business travel. We also learned that 70% of fathers and 61% of mothers who left their spouse to watch the children while they were traveling for business felt badly about doing so.

Interestingly, shorter trips were more often perceived to have a negative effect on respondents’ parenting: For example, 46% said that one- to two-day trips were the most detrimental. On the flip side, 64% reported that trips lasting five days or more were actually a positive force for their parenting, potentially due to the excitement created by their return.

On the marriage side of things, frequent or extended business travel can be tricky to navigate, although proper communication can make a world of difference when you’re worlds apart. About a quarter of both men and women said business trips took a toll on their marriage, but that number was greatly offset by the number of people who said it actually did some good (time apart can be healing!), and an even greater number reported no effect at all.

While traveling for work can be a little grueling at times, our survey revealed that it could actually lead to greater job satisfaction overall. Generally, travelers reported a greater sense of achievement and success when it came to their careers, and some were even more focused and productive while they were on the road.

Most people said their travel schedule had no effect— or a positive effect!— on their marriages, while parents generally expressed the opposite sentiment. Arguably, traveler’s sleep schedules took the biggest toll: Respondents reported having more turbulent sleep, and less of it, while they were out of office.

You can’t control which mattress you get at your next hotel, but you can make the call for your bed back at home! Don’t buy a new mattress without consulting SavvySleeper, the ultimate resource for reviews, product breakdowns, and even sales guides that reveal the best times to make your purchase. Head to SavvySleeper.org to discover your perfect fit— and the best sleep of your life!

We surveyed 867 employed people using the Amazon Mechanical Turk platform— 639 who traveled for business and 228 who did not. 255 respondents were female, and 384 were male. Respondents ranged in age from 18 to 74 with an average age of approximately 36. To ensure that respondents took our survey seriously, all respondents were required to identify and correctly answer two separate attention-check questions. Our margin of error was 3% with a 95% confidence interval.

In many cases, questions and responses were rephrased for clarity or brevity. To help ensure statistical accuracy, outliers were removed where appropriate. These data rely on self-reporting, and strict statistical testing was not performed. Potential issues with self-reported data include but are not limited to: exaggeration, selective memory, and attribution errors on the part of respondents.

Whether you’re reading this article in a plane, train or automobile, please feel free to share it with friends, family, and colleagues for noncommercial purposes. All we ask is that you always link back to the original page so people can get the full story, and credit will be given where it’s due. 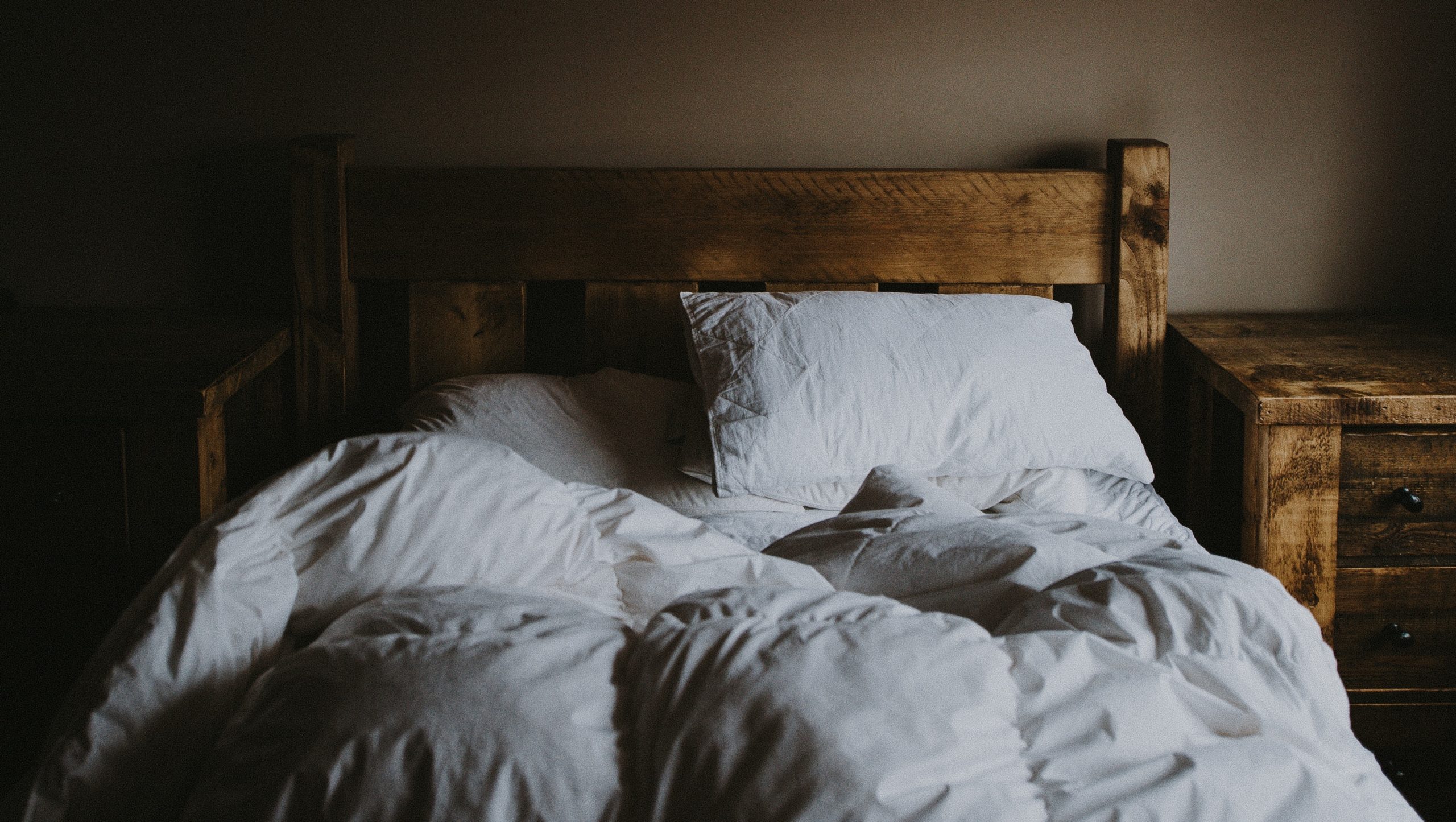