There are plenty of reasons why comparing your working life to a rat race can be discouraging. In fact, the idea of working long hours at a job you’re not exactly passionate about or struggling to get the recognition you deserve is disheartening at best.

But what if the thing holding you back at work or giving you the Sunday blues doesn’t have anything to do with your job? If you’re underestimating just how miserable (and tired) the daily drive into work makes most people, you could be overlooking a key factor why getting out of bed on Monday can feel like such a drag.

To help shine some extra light on a growing problem for American employees, we surveyed nearly 1,000 people about their routine rides to and from work and how those commutes affected their lives. Do higher salaries always mean longer driving times, and when is time finally worth more than the money? Let’s take a look.

Putting in the Miles 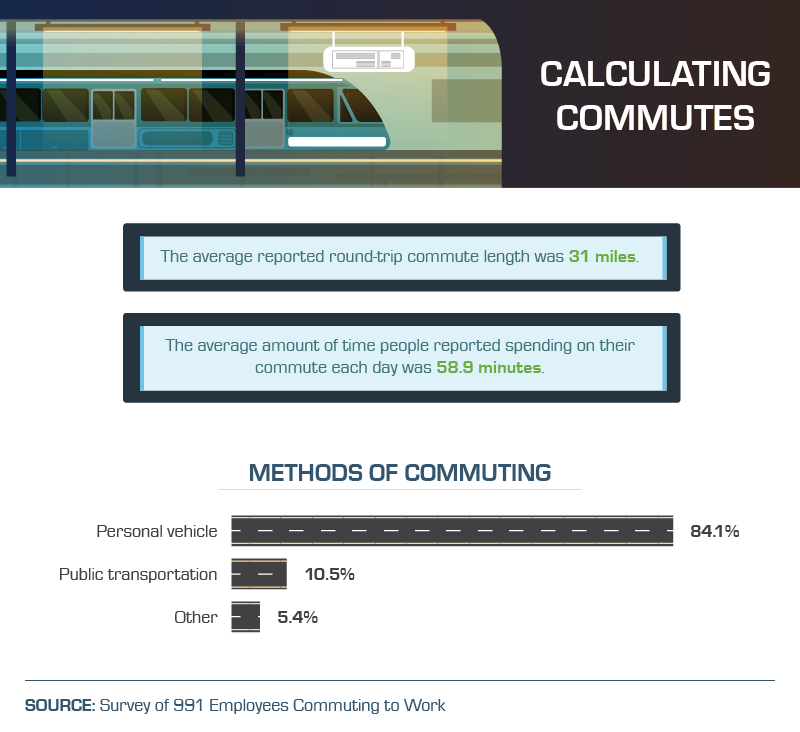 No, you’re not imagining things. Your commute to work is probably getting longer somewhere between the average number of miles to get from your driveway to the office parking lot and the number of minutes you’ll likely spend sitting in traffic.

According to people surveyed, the average round-trip commute to work was 31 miles. Hitting green lights on your way in and completely avoiding traffic might be a pipe dream because those 31-mile commutes clocked in at just under 59 minutes on average.

It’s easy to think of all the things you could accomplish if you weren’t behind the wheel. While one in 10 people utilized public transportation for their commutes, 84 percent said they used their personal vehicles instead. 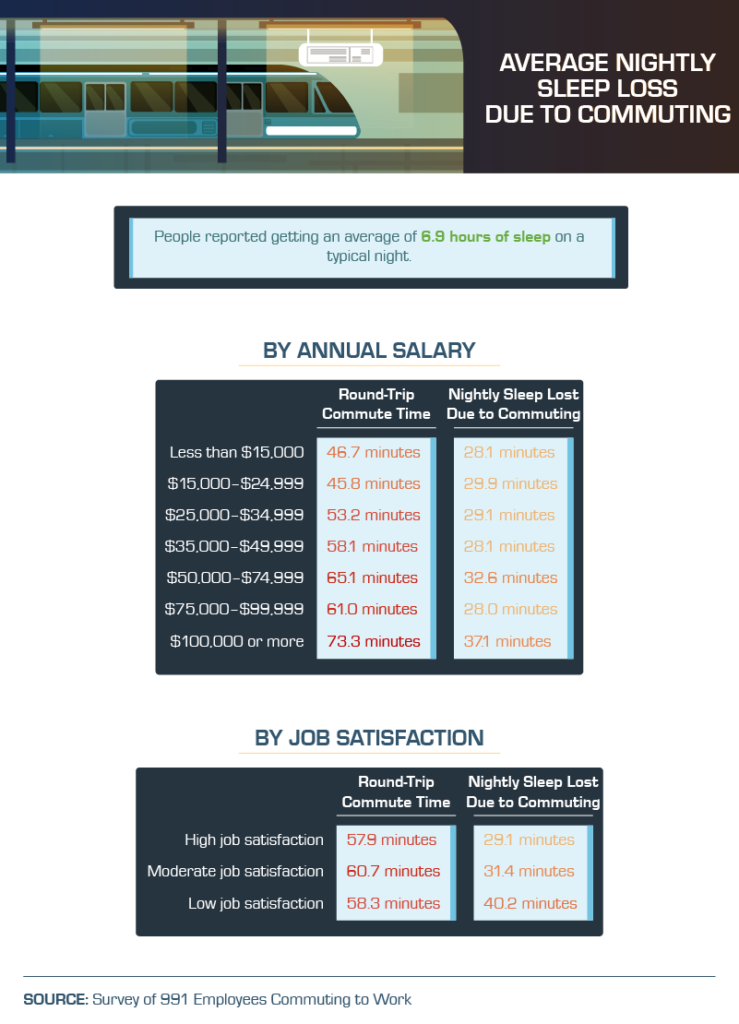 Research maintains that spending extra time fighting through traffic at the end of the day isn’t just a stressful experience – it can also be bad for your health. Not only will it make you more likely to snack, add to your stress levels, and make you miss time with friends and family, but a longer commute could be cutting into your sleep as well.

Like food for your brain, getting enough sleep at night can lower your risk for heart disease, strokes, and high blood pressure. No matter how you slice it, losing sleep as a result of your daily drive to work is only going to make your day worse.

While the average person reported 6.9 hours of sleep each night (just shy of the recommended seven to nine hours), it was people driving the most who sacrificed the most rest. People making $100,000 or more spent the most time commuting daily, with an average round-trip time of 73.3 minutes. Additionally, they lost an average of 37.1 minutes of sleep due to their commute.

According to one study, extra shut-eye can be the difference between feeling focused and productive all day and dragging your feet until it’s time to clock out. Respondents with the shortest drive times and the least amount of sleep lost were the most likely to have high job satisfaction. 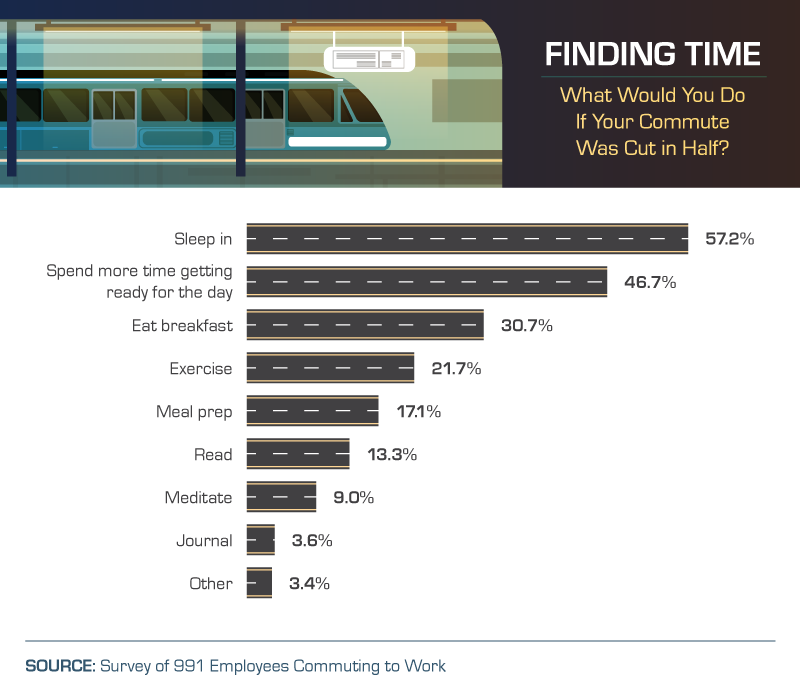 We always want more of what we can’t have, but you’ll never be able to add more time to your day. In fact, time ranks as the most precious commodity for many people.

Respondents had plenty of ideas about how they’d spend their time if they could suddenly get back even half of their commutes. Roughly 57 percent of people said they would opt to sleep in if their commute was cut in half. That’s a wise choice considering that the amount of sleep you get each night is crucial to your health. 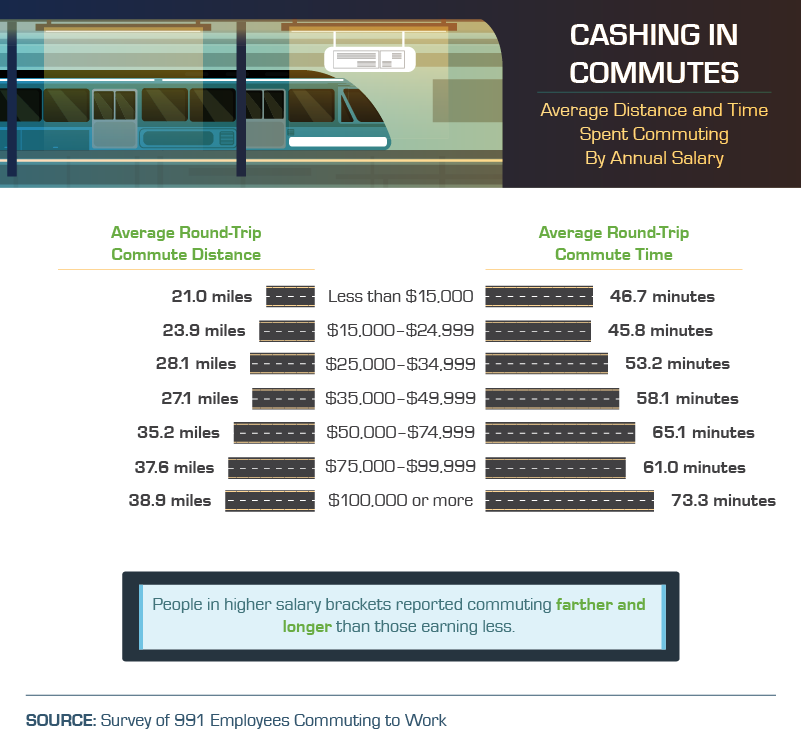 Despite the sacrifices and potential consequences of commuting, elongated drive times might be less an obligation for some people and more of a choice. If you’re chasing a new job or title change, adding a few extra minutes to your commute might not seem so bad.

According to our study, people earning the most drove more miles every day. Respondents with salaries between $50,000 and $74,999 commuted 35 miles round trip on average, while those with salaries of $100,000 or more averaged the longest distance at nearly 39 miles per round trip.

While pulling in a higher paycheck can give you more financial freedom, it may also mean making more sacrifices to your work-life balance. Even though studies continue to point out the deteriorating effects of not getting enough sleep, there always seems to be people who believe that finding a balance between work and home shouldn’t be our primary goal. 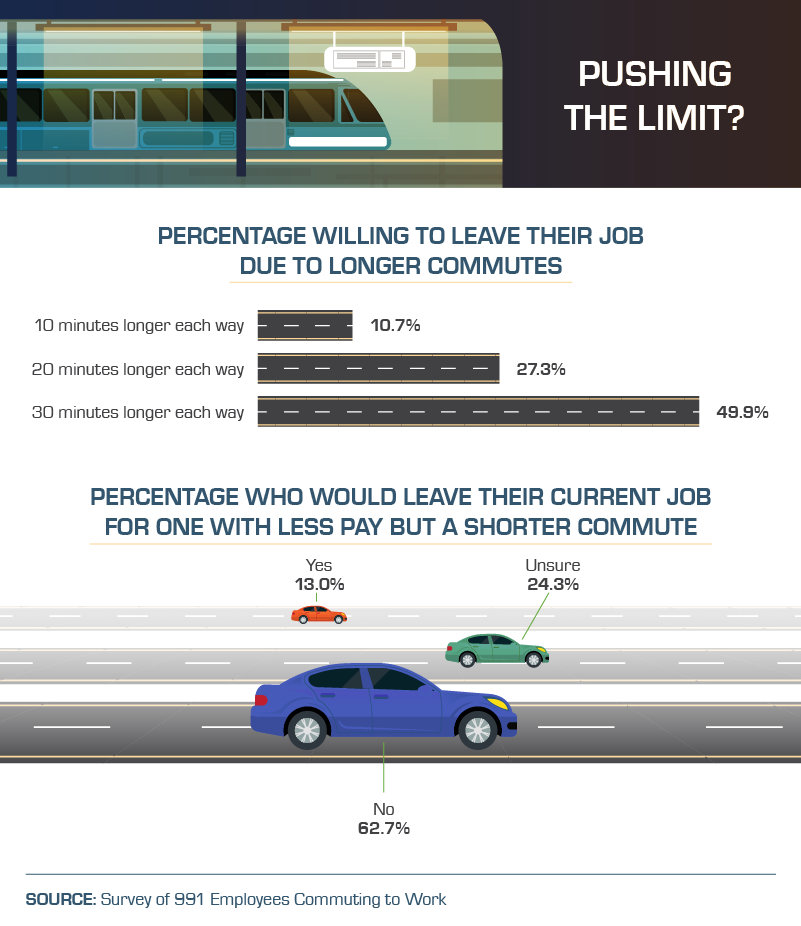 Maybe podcasts or audiobooks make your commute more enjoyable, or watching your total commute tick up a bit each year doesn’t sound so terrible. But consider this: Driving an hour each way to and from work adds up to nearly 21 days a year, on average. If you think about investing that time in a new hobby or time with family, you realize just how much of your life you waste on the road.

So is our commute worth it? In a way, the answer could be “yes.” Less than 11 percent of people said they would quit their job if their commute was 10 minutes longer each way. Roughly 27 percent were willing to walk away from a job that cost them 20 more minutes each way, and close to 50 percent would do the same for an extra 30-minute drive in both directions.

In most cases, money was powerful motivation for people. Nearly 63 percent weren’t willing to leave a job for a shorter commute if it meant less pay, and another 24 percent were unsure how they’d react if faced with this decision.

The Sleep You Want

Time is occasionally one of the casualties of our careers, and while it might not be healthy, money tends to trump time when people are forced to pick between the two. Respondents largely weren’t willing to give up their job (and subsequent commute) if it meant having to take a pay cut.

We surveyed 991 people using Amazon’s Mechanical Turk. Respondents had to report being a salaried or hourly employee to qualify for the survey. Seventeen respondents reported working from home and were allowed to complete the survey, but they were excluded from our final visualization of the data.

Respondents were 54.4 percent male and 45.6 percent female. The average age of respondents was 35.3 with a standard deviation of 10.

Parts of this project look at job satisfaction. Job satisfaction was determined using the Aggregate Job Satisfaction Scale by Vicente González-Romá and Ana Hernández. The scale consisted of 13 measures that respondents ranked on a six-point Likert scale from very dissatisfied (1) to very satisfied (6). An overall satisfaction score from 13 to 78 was calculated for each respondent. The scores were divided into three groups as follows:

Respondents were asked to report the length of their one-way commute in miles and in minutes. We then multiplied these averages by two to get the average length and time of round-trip commutes.

All averages presented in this project were calculated to exclude outliers. This was done by multiplying the standard deviation by three and adding that amount to the initial average. All data points above that sum were then excluded.

Parts of this project include demographic breakdowns by annual personal salary. Respondents were given the following options when reporting their annual salary:

When asked what they would use the extra time for if their commute was cut in half, respondents were instructed to only select things they would do that they didn’t currently do. Additionally, the question was in a check-all-that-apply format, so respondents could select multiple answers.

The data presented in this project was self-reported. Common issues with self-reported data include selective memory, telescoping, attribution, and exaggeration. It’s possible that the length of commutes, in time and miles, were exaggerated and skewed the data. The same is possible in the reported amount of sleep people lost due to their commutes.

We did not perform any statistical testing. The conclusions presented in this project are based on means alone. This content is for entertainment purposes only, and future studies should explore this topic more vigorously.

Want to compare commute times with your friends and family? Feel free to share this with them as long as it’s for noncommercial purposes. By linking back here, you not only allow them to see the entire study with its methodology but also you give credit to our contributors for their efforts.