Shedding Light on Sleep: Exploring the Effects of Light Pollution on Sleep

Smartphones are a lot of things, but did you know they’re also a tiny form of pollution after dark? Smartphones, lamps, computers, or really anything that generates artificial light emit what is known as light pollution.

So how do Americans feel about it, and where is the worst light pollution? Starting with the most recent available data from the U.S. Census Bureau, we looked at the worst emitters of light pollution around the country. We also compared this data to residents’ ability to sleep. Finally, we surveyed nearly 1,000 people to see how light pollution impacts their lives personally. Continue reading (unless it’s after dark) to see what we found.

Although we often hear of Los Angeles being the most polluted city in the U.S., the same cannot be said for light pollution. Instead, our nation’s capital set an unfortunate tone for the rest of the country: Washington, D.C., had the highest levels of light pollution out of any U.S. city.

Detroit, Michigan, was the second most light-polluted city in the U.S. Best known as the country’s automobile industry center, Detroit’s car production may also be the problem. Not only does light pollution on the roads make drivers less safe, but the Detroit Free Press has even lamented that “for many in southeast Michigan, starry evening skies are just a childhood memory.” The same might be said for the residents of Reno, Anchorage, and Minneapolis, which ranked third, fourth, and fifth for the heaviest light pollution, respectively.

If starry night skies are becoming a thing of the past, what about the sleep we’re supposed to enjoy underneath them? It’s disappearing too, and New York is no longer the only city that never sleeps.

Detroit’s light pollution ranking was 49 out of 50, yet the city had the highest percentage of residents getting fewer than seven hours of sleep each night. Since manufacturing and automobile employees aren’t likely working night shifts this frequently, it could be a massive amount of light pollution, and not work, that’s keeping Detroit residents awake. 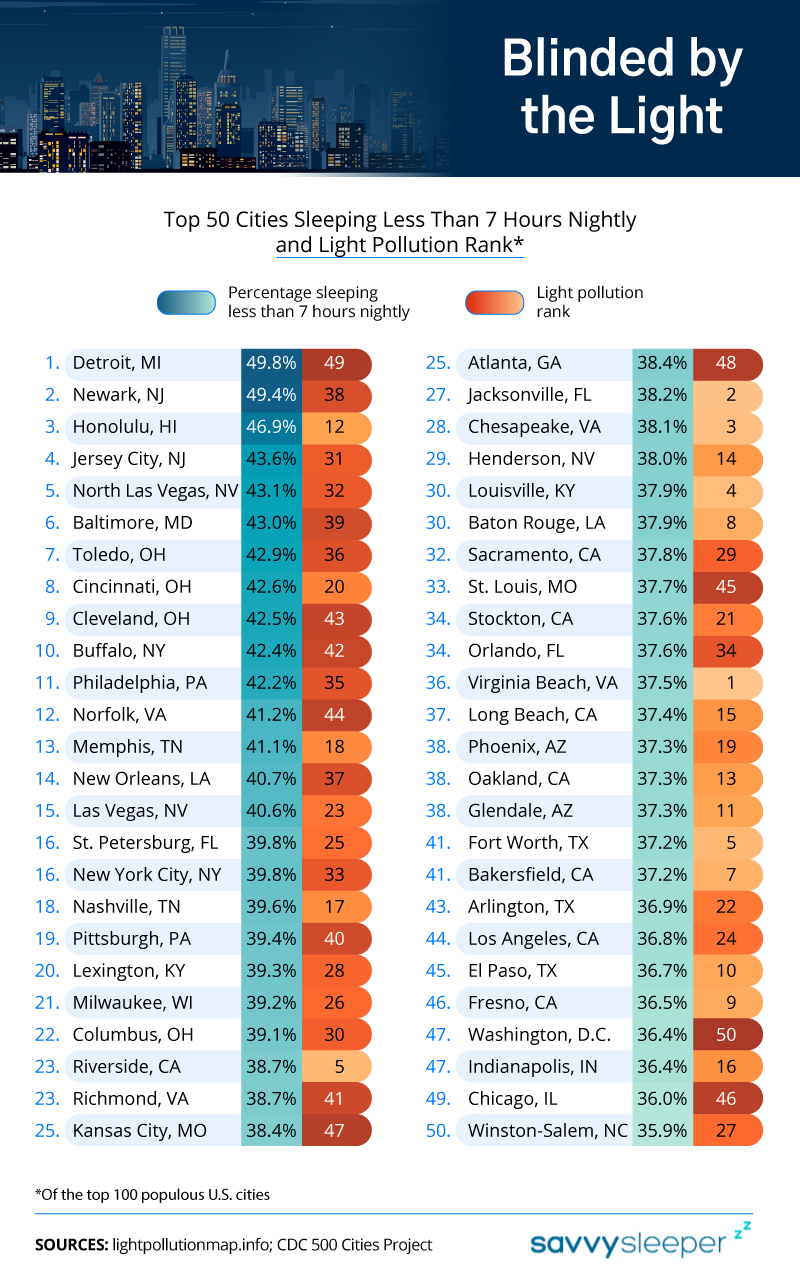 Newark also reported 49.4 percent of its residents getting fewer than seven hours of sleep each night. As New Jersey’s largest metropolis, this represents too great a portion of residents not functioning optimally throughout the day. And this correlated with a light pollution rank of 38 – still high, but lower than Detroit.

Fortunately, for the leaders of this country, residents of Washington, D.C. were more likely to get a better night’s sleep despite the light pollution. That said, over a thirdstill got fewer than seven hours of sleep each night, and light pollution certainly isn’t helping.

Only 11.7 percent of Americans believed too much artificial light isn’t harmful; the majority were certain that light pollution is bad. We even made sure to test each participant’s understanding of light pollution. As it turns out, they understand light pollution and are adamant about its risks. 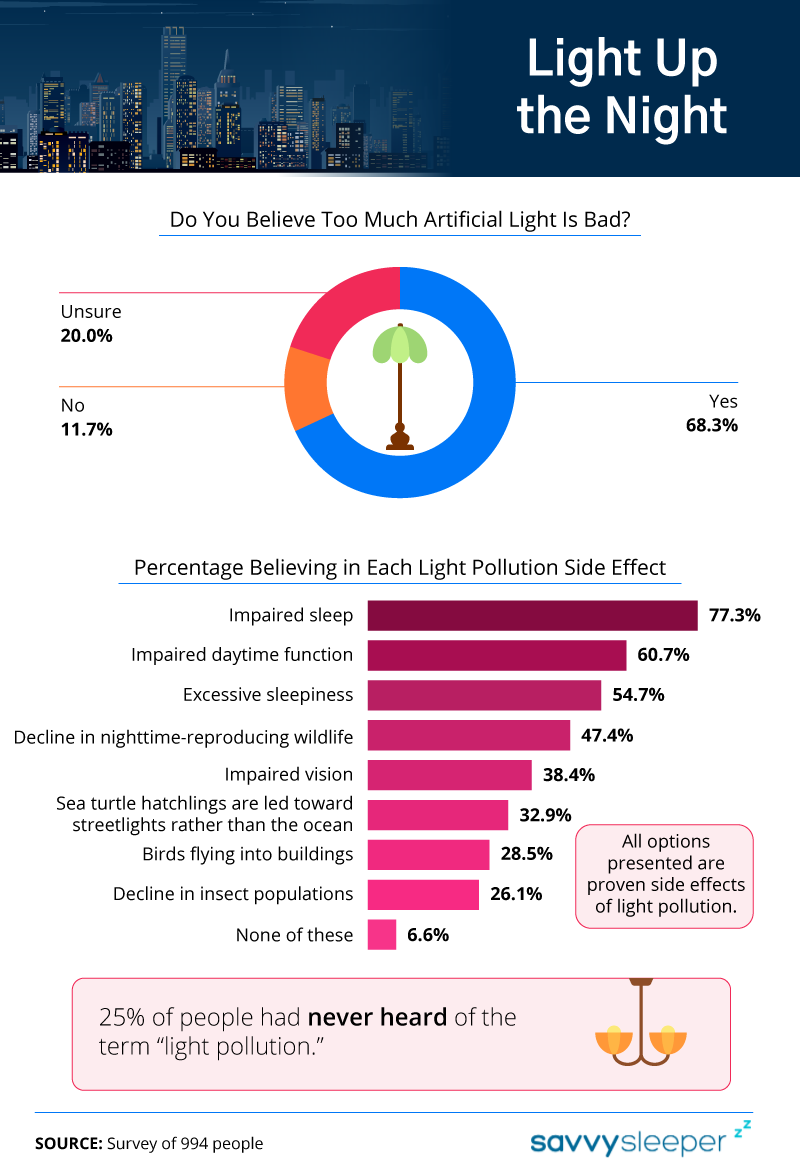 We would have to agree. Seventy-seven percent believed light pollution impaired sleep, and another 60.7 percent attributed impaired daytime function to light pollution, as well. Things like sleepiness (54.7 percent), impaired vision (38.4 percent), and even birds flying into buildings (28.5 percent) were all thought to be repercussions of excessive artificial light. And we’d also like to reiterate the loss of starry evenings, which are undoubtedly a casualty of modern light pollution.

Sometimes, avoiding light pollution isn’t as easy as turning off a switch, even at home. Fewer than 10 percent of Americans younger than 60 live alone, so there are other family members or roommates to consider even when the individual is ready to go to bed. Even those who did sleep alone still slept with the lights on for an average of 2.4 nights each week. 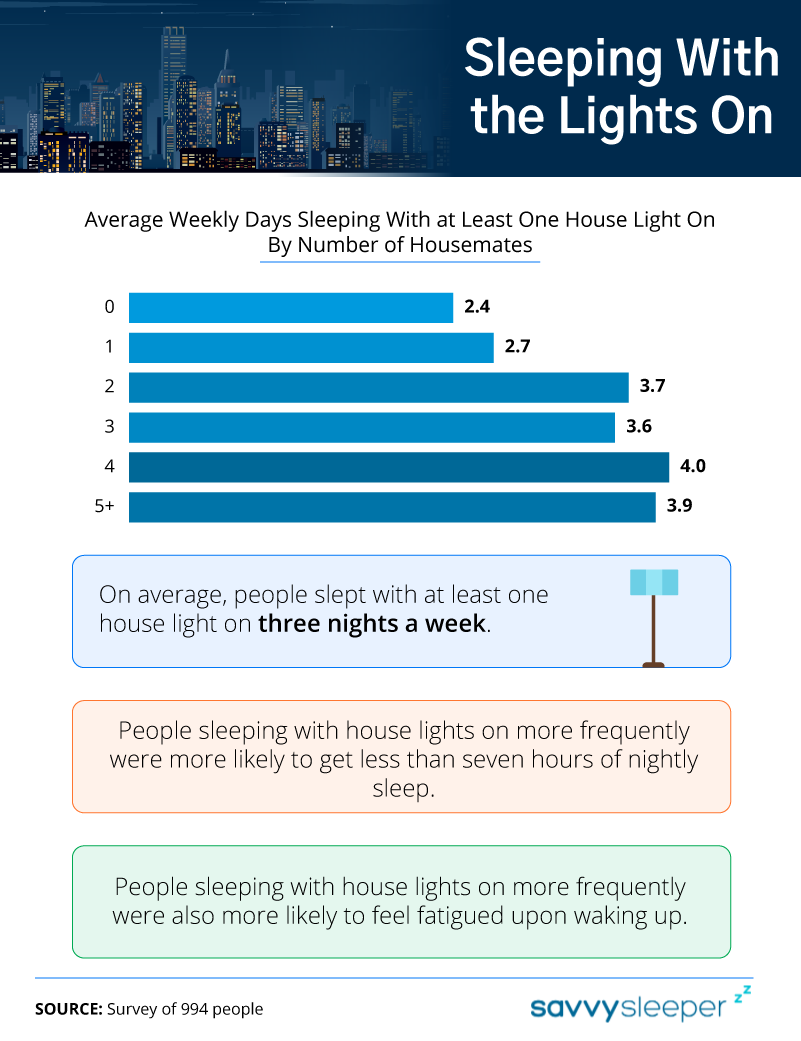 Overall, people slept with at least one light on three days each week. This is problematic not only due to financial waste but also because of light pollution leading to poor sleep. People who slept with the lights on were more likely to report fewer than seven hours of sleep each night and more likely to feel fatigued upon waking. Our results only confirm what scientific studies have proven: light exposure later in the day results in poorer and less sleep. 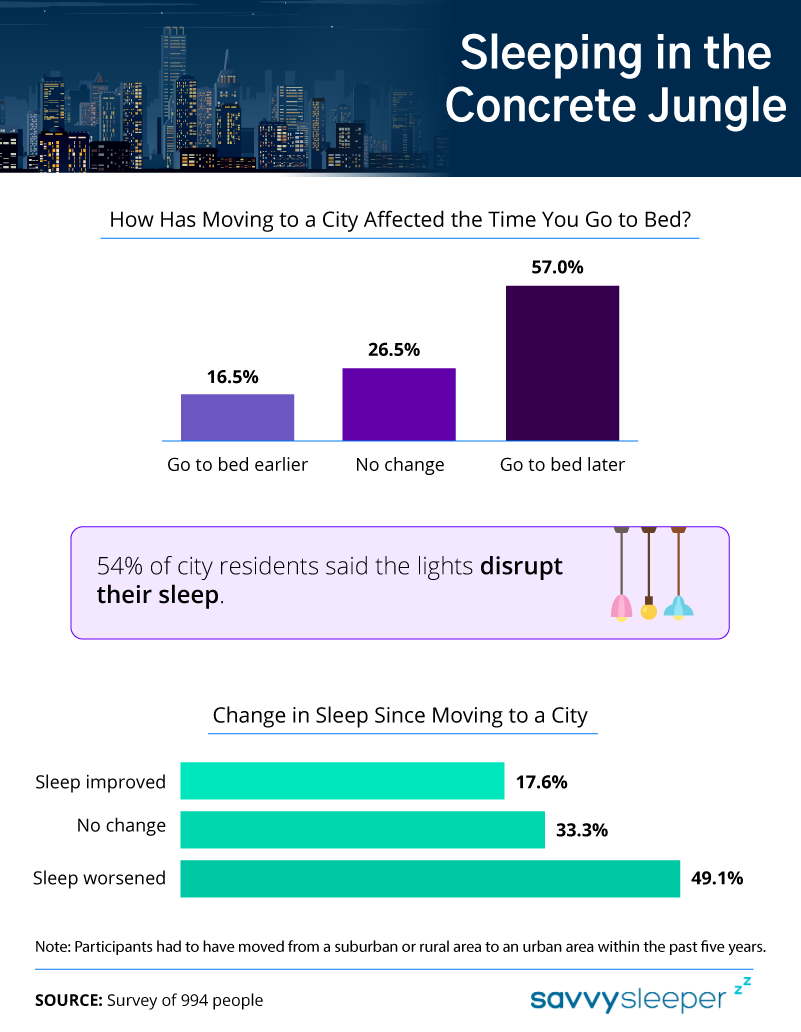 Of course, big cities and well-lit locations offer many things: career opportunities, more activities and events, and perhaps friends and family. But these goings-on have their price beyond money. Light pollution, as our respondents will tell you, has them sleeping less and experiencing a more tired life during the day.

Shining a Light on the Problem

Although we’re not telling you where or how to live, we will always advocate for education on behalf of sleep. Remember that even in the most light-polluted cities, more than half of residents are still managing to sleep seven hours or more each night. If you do happen to live in an area with intense light pollution, some proactive steps can improve both your days and nights. That’s why we’re here to help.

In response to our findings, Ashley Doyle, editor at SavvySleeper, comments:

“The data makes it quite clear that additional light beyond normal daylight hours does more than prevent us from seeing our starry skies: It prevents us from achieving optimal sleep. If you think light pollution, or artificial light after dark, is impacting your sleep, there are several easy steps to mitigate this.

If you absolutely need artificial light after sundown, try using a pair of glasses that block the blue light. If you normally fall asleep watching TV, try reading instead and see if you feel more rested in the morning.”

SavvySleeper sheds light in the right way. We’re the experts in mattress guides, reviews, and pertinent sleep research. However well-lit your surroundings might be, a quality mattress is a key place to start for your next great rest.

Data on light pollution and “radiance” were gathered using the map offered by lightpollutionmap.info for the top 100 cities by U.S. population. Data from the CDC’s 500 Cities Project were used to show the percentage of the population of each city that got less than seven hours of sleep each night.

Next, a survey was run using Amazon’s Mechanical Turk service to gauge the public’s perception of light pollution and how it affects them. 994 people in total were surveyed. 446 participants were men (5 percent margin of error), 546 were women (4 percent margin of error), and two chose to identify as neither. 351 respondents said they had moved to a city or urban area in the past five years, while 643 had not.

All survey data included in the above study rely on self-reporting, which can come with issues such as telescoping and exaggeration. To combat these issues, an attention check was used to ensure only respondents who paid full attention were included in the results.

If you’re reading this during the day, we fully endorse sharing it with others for noncommercial purposes. Just be sure to link back to this page so that its contributors can receive proper credit for their work. And if the sun has already set, it might be time to get some sleep!