Self-driving vehicles used to be on the same playing field as flying cars – a mere dream in a tech-filled utopia. But rapidly advancing technology and artificial intelligence (AI) have brought that dream significantly closer to reality.

With semi-autonomous cars already on the road and fully self-driving ones soon in the future, we wanted to know how trusting or skeptical people are of this technology. We surveyed over 1,000 people about sleeping in a self-driving car and autonomous vehicles in general. Self-driving technology may be intended to create a safer means of transportation, but this may be the one area where people value control over convenience. Keep reading to find out.

Resting on the Road 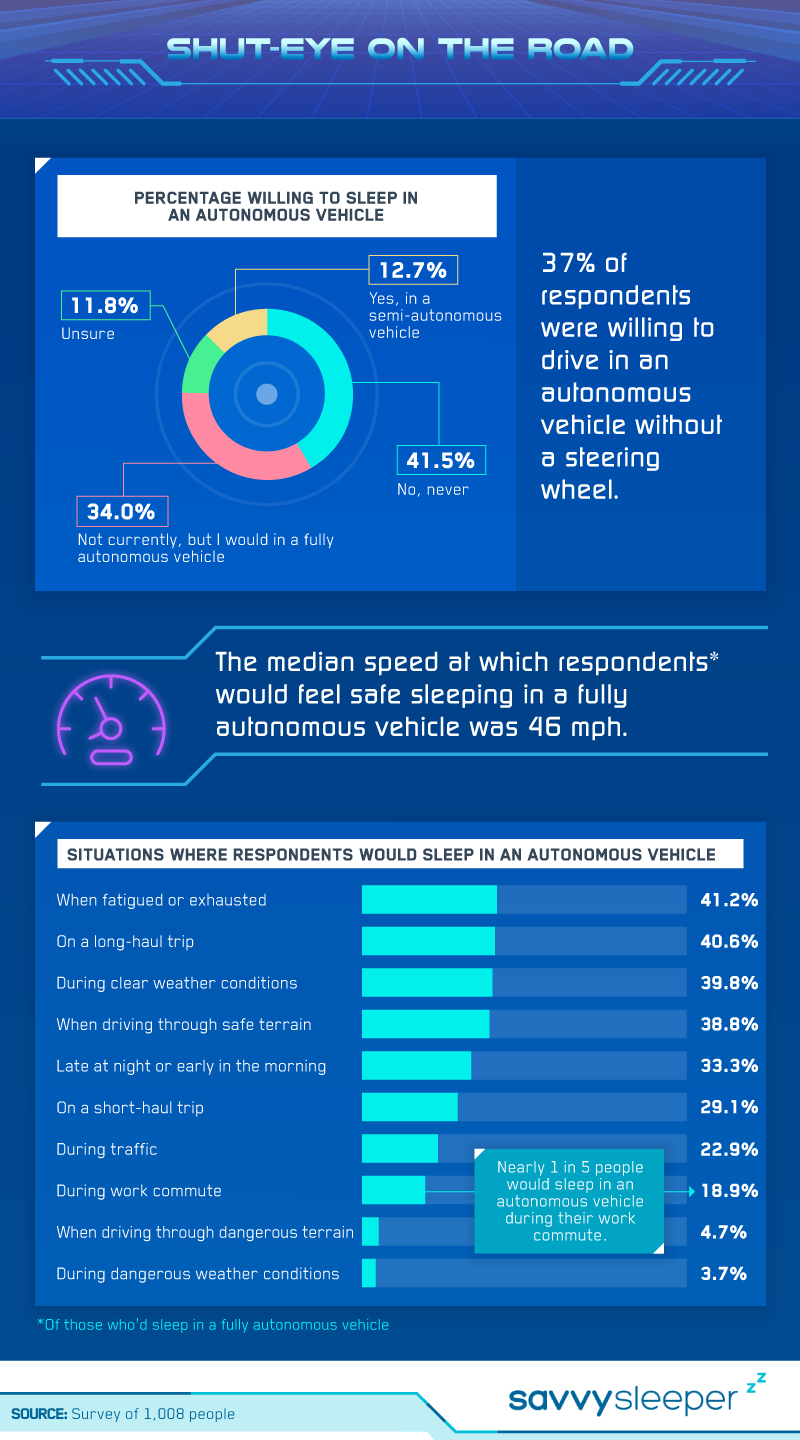 Interestingly, men and nonparents were the most likely to say they’d be willing to sleep in a fully autonomous car in the future. Considering that the regulations and features that will come with fully autonomous vehicles are still relatively unknown, parents may be hesitant to say they’ll snooze due to safety concerns.

Feeling fatigued or exhausted was the most common situation in which people would sleep in an autonomous vehicle, followed by a long-haul trip, and during clear weather conditions. On the other hand, only 4.7 percent and 3.7 percent of respondents said they would do so when driving through dangerous terrain and during dangerous weather conditions, respectively. Regardless of the situation, though, people who’d sleep in a fully autonomous vehicle would only feel safe doing so at around a median speed of 46 mph.

Driving while drowsy is an incredibly common problem. We discovered that people seem to prefer autonomous vehicles if it means less tired drivers on the road. Compared to 26.1 percent of respondents, 73.9 percent of people said they would be more bothered by tired drivers than autonomous vehicles. Along the same lines, nearly 60 percent said removing fatigued drivers from the road was the top benefit of sleeping in a self-driving car. 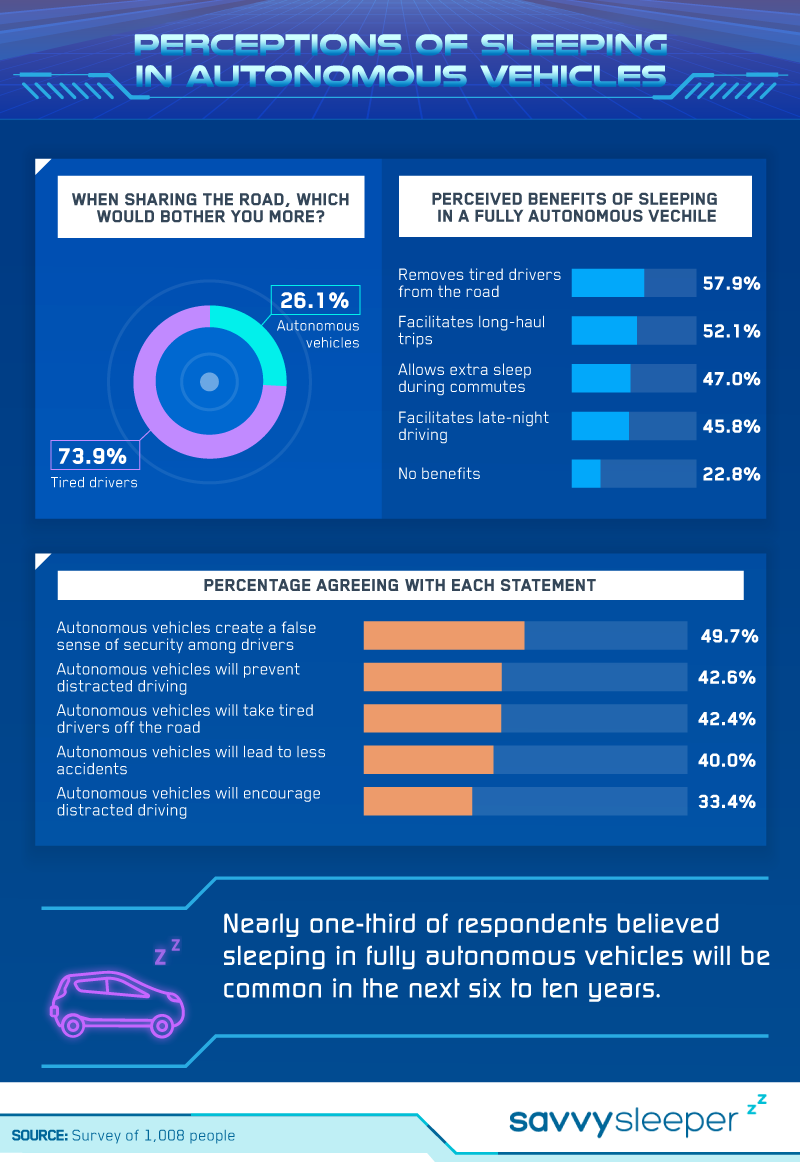 Despite hesitation around sleeping in autonomous cars, people had relatively positive perceptions of them in general. Over 42 percent of people agreed that autonomous vehicles would prevent distracted driving, while another 42.4 percent said they’ll take drowsy drivers off the road.

Nevertheless, people were still quick to point out flaws – nearly 50 percent said autonomous cars would create a false sense of security among drivers, while just over a third thought that they would encourage distracted driving.

When it comes to self-driving cars, there are five levels of autonomy, each requiring a varying degree of human control. While most people are comfortable kicking on cruise control, people seem to be significantly more wary of level five, fully autonomous vehicles. Lack of control was the top reason people wouldn’t sleep in a fully autonomous vehicle, followed by a lack of trust toward other drivers on the road. 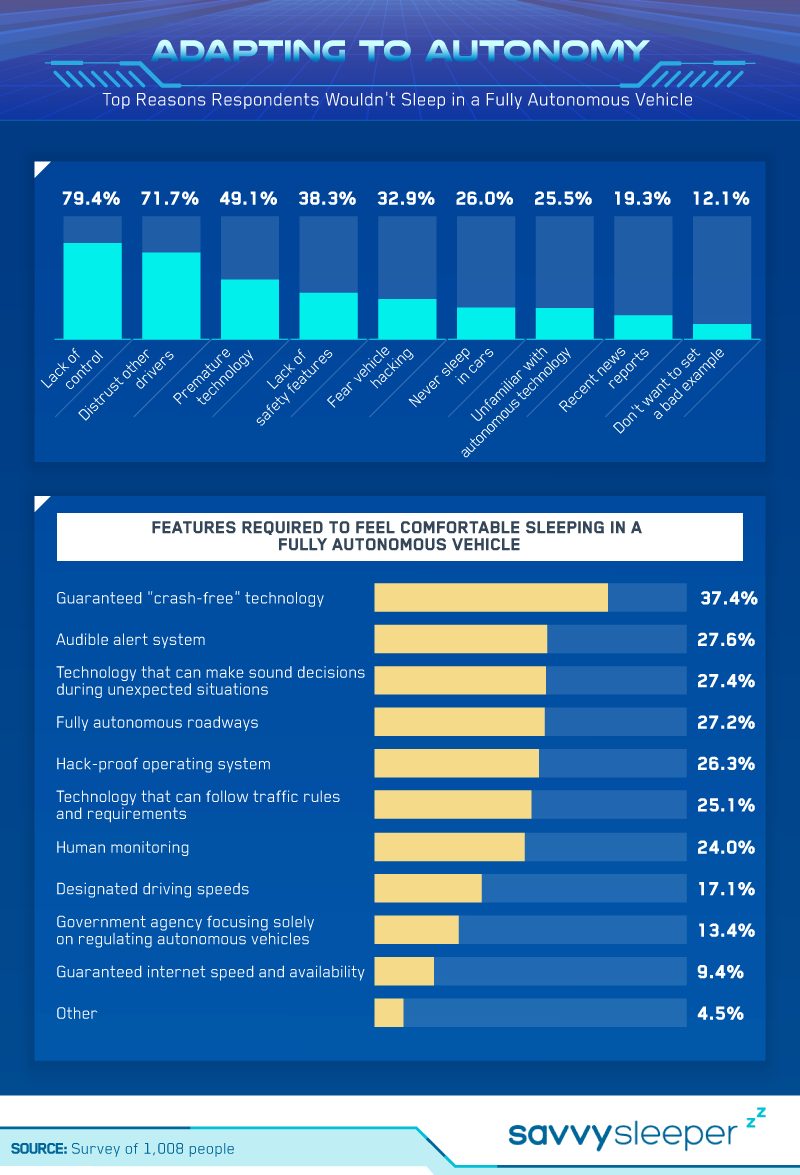 But even in a world taken over by tech, people were also fearful of autonomous vehicles getting hacked. While researchers have yet to conclude on the likelihood of car hacking, they know one thing – it could have significant impacts on city traffic flow and make clusters of roads inaccessible to even emergency personnel.

On top of measures to protect from hacking, what features are needed to make people feel comfortable sleeping in fully autonomous cars? Just under 40 percent of people said guaranteed “crash-free” technology was a necessity, while 27.6 percent and 27.4 percent said they needed an audible alert system and vehicles that can make sound decisions during unexpected situations, respectively. Interestingly, despite the entire point of autonomous cars being to eliminate the need for human control, 24 percent of people said they would need fully autonomous cars to have human monitoring to feel comfortable enough to sleep in them.

While the exact specs and features have yet to be revealed for fully autonomous cars, people were slightly more likely to feel safe sleeping in vehicles with full autonomy compared to semi-autonomous ones. Nevertheless, the majority reported feeling unsafe sleeping in both. And it seems to boil down to direct control. Over half of people said they’d feel safer sleeping on public transportation than in a fully autonomous vehicle, while 64.4 percent and 66.8 percent said the same about a train and plane, respectively. 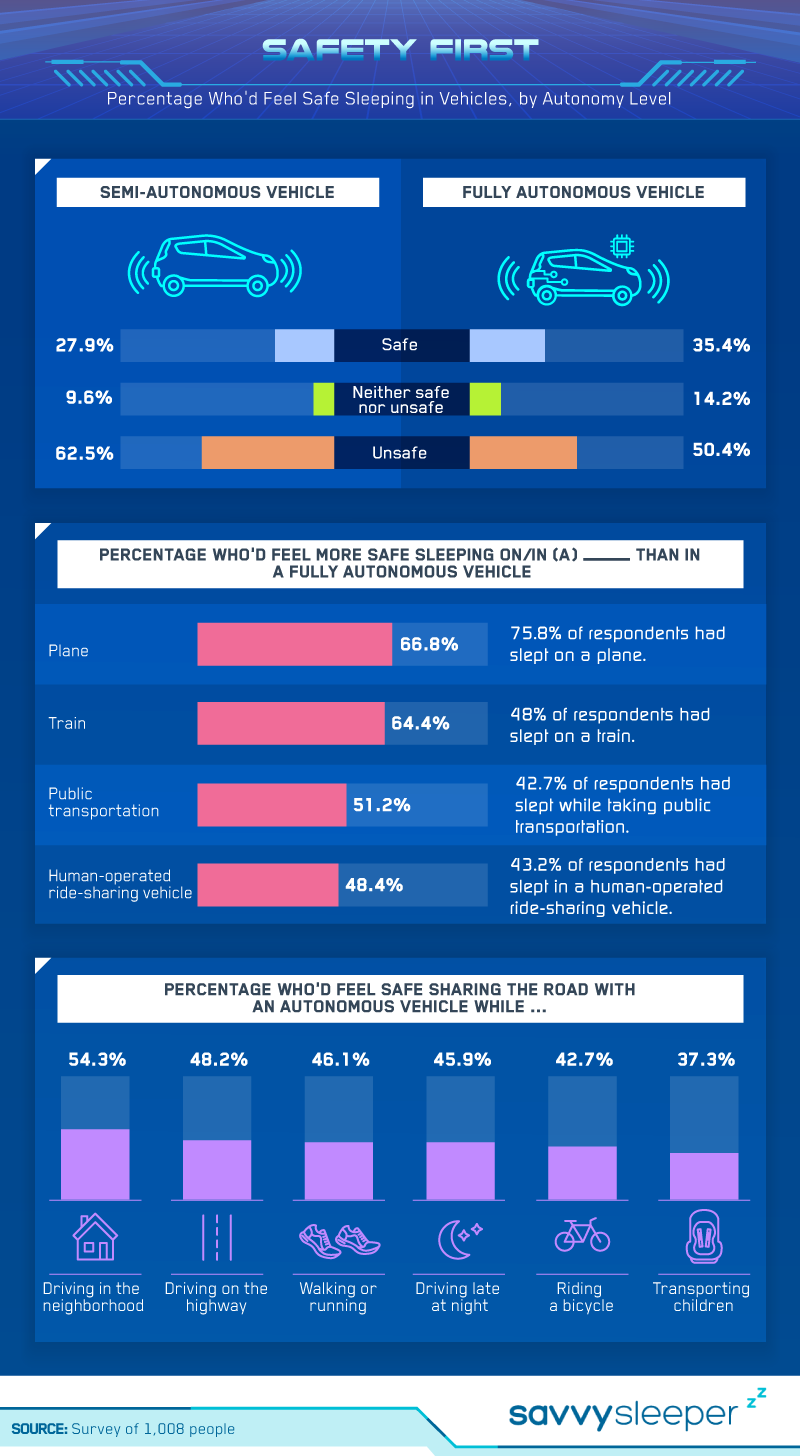 Sleeping drivers or not, people are still uncomfortable sharing the road with autonomous cars. But until self-driving cars become the standard, the roads will need to be shared by human-controlled and AI-controlled vehicles.

Catch a Ride and a Nap

Before fully autonomous cars can hit the road, they need to be regulated. However, while regulating self-driving cars is challenging, the majority of people agreed that sleeping in a fully autonomous vehicle should be legal. However, 25.5 percent were strongly against sleeping while AI drives, and 31.3 percent were unsure. Regardless of possible regulations, nearly 60 percent of people wanted autonomous technology in their next car, and 60.6 percent planned to buy a car with semi-autonomous tech in one to five years. 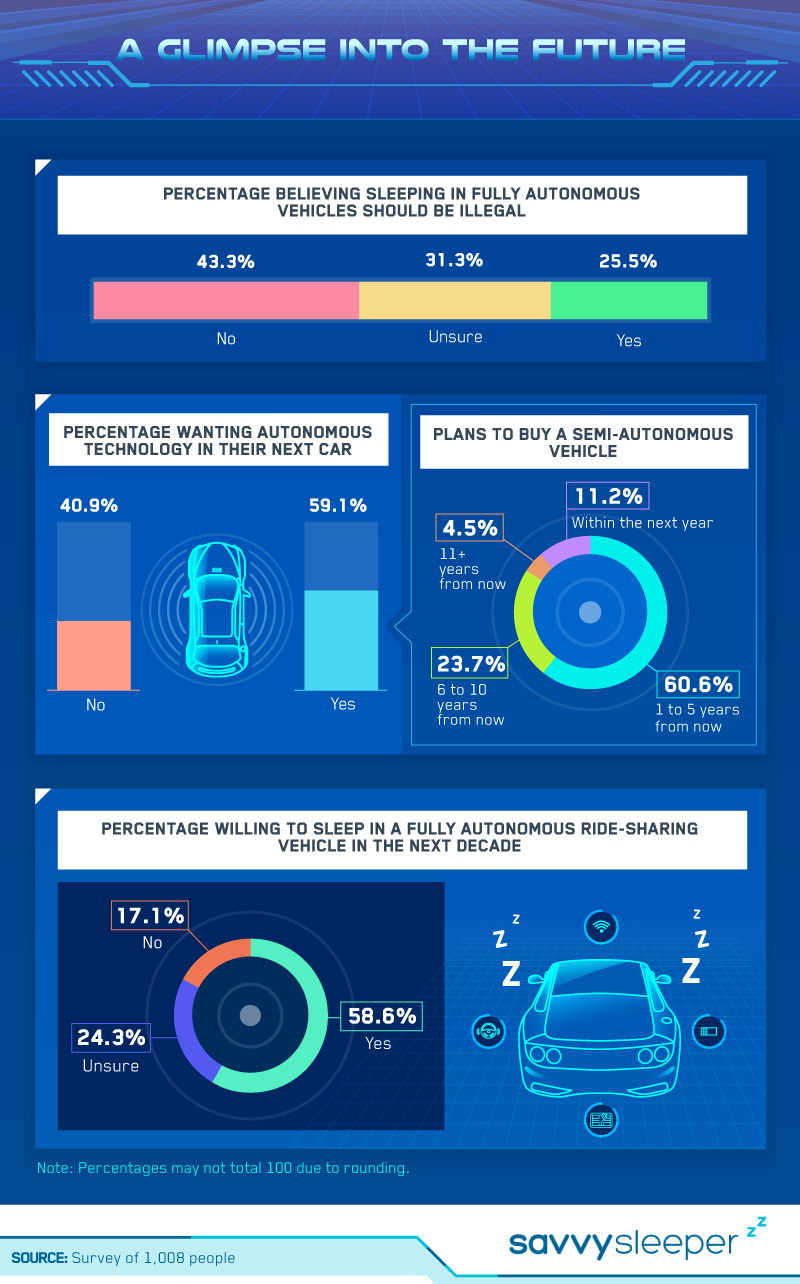 Autonomous vehicles won’t only be for personal use, though. Ride-sharing services could make up a significant portion of fully autonomous cars, aiming to cut costs by removing human drivers entirely. And drivers seem to have faith in the future – nearly 60 percent of people said they were willing to sleep in a fully autonomous ride-hailing car 10 years from now, with only 17.1 percent reporting they were unwilling.

Whenever autonomous vehicles make their full debut, the decision to sleep in the driver’s seat while AI is in charge will come down to personal choice – assuming regulators don’t step in and cease all snoozing. For the most part, people seemed to think sleeping in a fully autonomous car was well within their means and trusted the technology enough to do so. But for others, more technologically advanced features and safety testing will have to be carried out for them to feel comfortable.

In response to the survey results, Ashley Doyle, editor at Savvy Sleeper, comments:

“The survey showed that most people agreed sleeping in a self-driving car is a far better option than taking the risk of driving while drowsy. But until self-driving cars can decrease the number of people who drive while tired, it is crucial to get enough rest before hitting the road. If you find yourself nodding off at the wheel, it may be time for a new mattress or upgrades to your sleep routine. Simple switches like a mattress that suits your sleep habits or even adjusting the temperature in your home can improve the quality of your sleep and make your drive safer. Self-driving cars or not, sleep will always be essential to well-being — on and off the road.”

For this study, we compiled results from 1,008 people via Amazon Mechanical Turk. Of the 1,008 people surveyed, 50.5 percent were male, 49.2 percent were female, and 0.3 percent identified as neither male nor female. Respondents ranged in age from 18 to 83 with an average of 37 and a standard deviation of 12. An attention-check question was used to identify and remove respondents who failed to read the questions and answers in their entirety.

This survey had a margin of error of plus or minus 3 percent at a 95 percent confidence level. Definitions were provided for both fully autonomous and semi-autonomous vehicles at the beginning of the survey. Respondents were allowed to reference these definitions at any point throughout the questionnaire.

The main limitation of this study is the reliance on self-reported responses. Self-reported data are faced with various issues, such as attribution, exaggeration, telescoping, and recency bias. An effort was made to minimize these errors throughout the survey design, data collection, and analysis.

Fully autonomous cars may be here before we know it, and they may bring sleeping drivers with them. If you know someone who would be interested in our findings, feel free to share this study with them. The graphics and content found here are available for noncommercial reuse. All we ask is that you include a link back to this page so that readers can get all the information and see our methodology. This also ensures our contributors receive proper credit.