It takes a lot of effort to be the kind of manager that rightfully earns his or her “No. 1 Boss” mug. As a leader, putting your best foot forward requires self-awareness, a compassionate attitude, and a willingness to communicate openly, among other things. With so much responsibility riding on your shoulders, setting yourself up for success is a must – and if you’re a savvy manager, you already know that success often starts with a good night’s sleep.

The link between rest and success has been explored extensively, but we wanted to take it one step further by investigating how sleep – or lack thereof – can affect bosses’ moods, performance, generosity, and more.

Read on to take a peek into American bosses’ sleep habits. 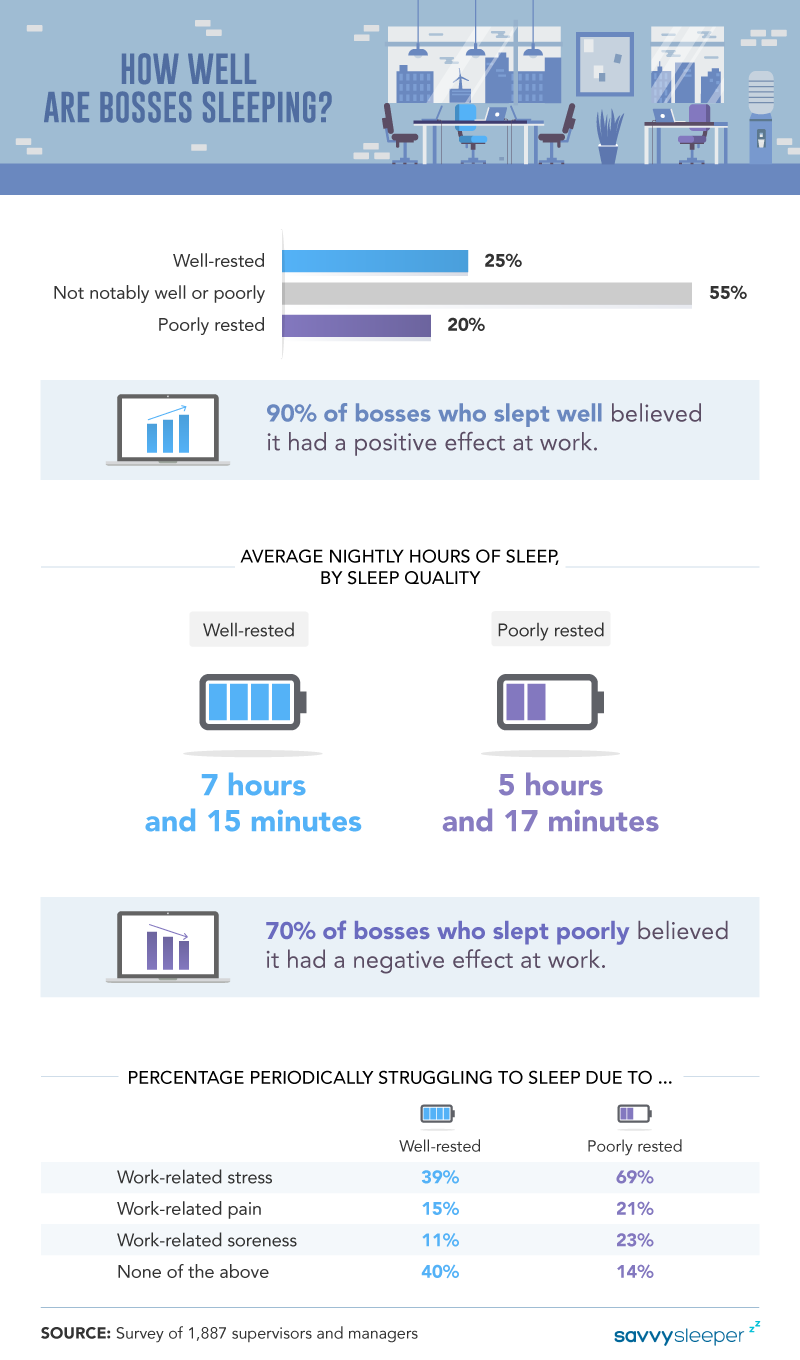 Being the boss is hard work, but the stress of managing employees did not seem to take a significant toll on our respondents’ sleep: 55% of bosses said they did not rest notably well or poorly. Another 25% said they typically wake up well-rested, while 20% experienced poor sleep. For the remainder of the study, we’ll focus on those two groups: well-rested and poorly rested bosses.

Respondents who clocked seven hours and 15 minutes of sleep fared much better in the morning than those who only got five hours and 17 minutes – but that discrepancy may have less to do with how long you spend asleep than you think.

The average sleep cycle is 90 minutes long, and healthy rest is usually comprised of five complete cycles. Five cycles of 90 minutes are equivalent to 7.5 hours, which is approaching how long our most-rested respondents spent asleep! In comparison, five hours and 17 minutes would place you right in the middle of three and four cycles, which is not as conducive to waking up feeling rested.

Those who experienced periodic sleep issues were far more likely to report being affected by work-related stress, throwing them into a loop of poor-quality rest and elevated stress. 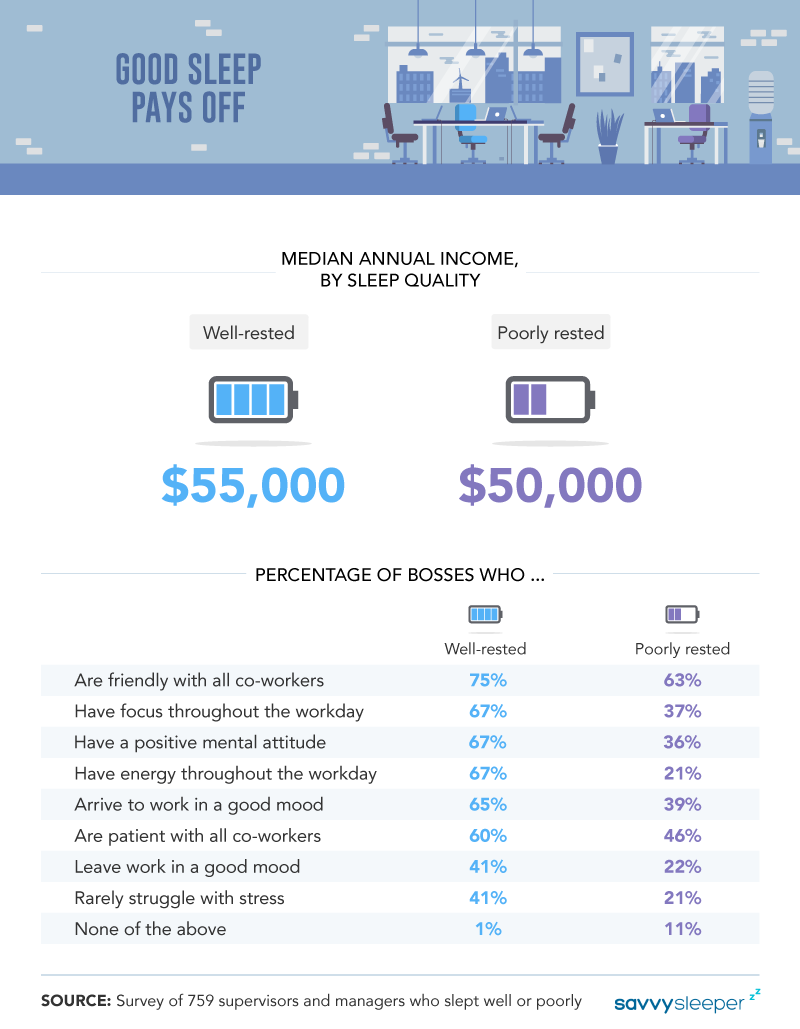 More restful sleep means more productivity, and more productivity can often lead to promotions, bonuses, and recognition in the workplace. Well-rested bosses earned an average of $5,000 more per year compared to their poorly rested counterparts, drawing an interesting parallel between rest and success.

Restful sleep was also associated with better overall work experience. Bosses who slept well were much more likely to adopt a friendly demeanor (75% vs. 63%), arrive at the office in a good mood (65% vs. 39%), and maintain focus throughout the day (67% vs. 37%), among other things. An essentially insignificant 1% of well-rested superiors exhibited none of the positive qualities associated with proper sleep, compared to more than 1 in 10 poorly rested bosses. 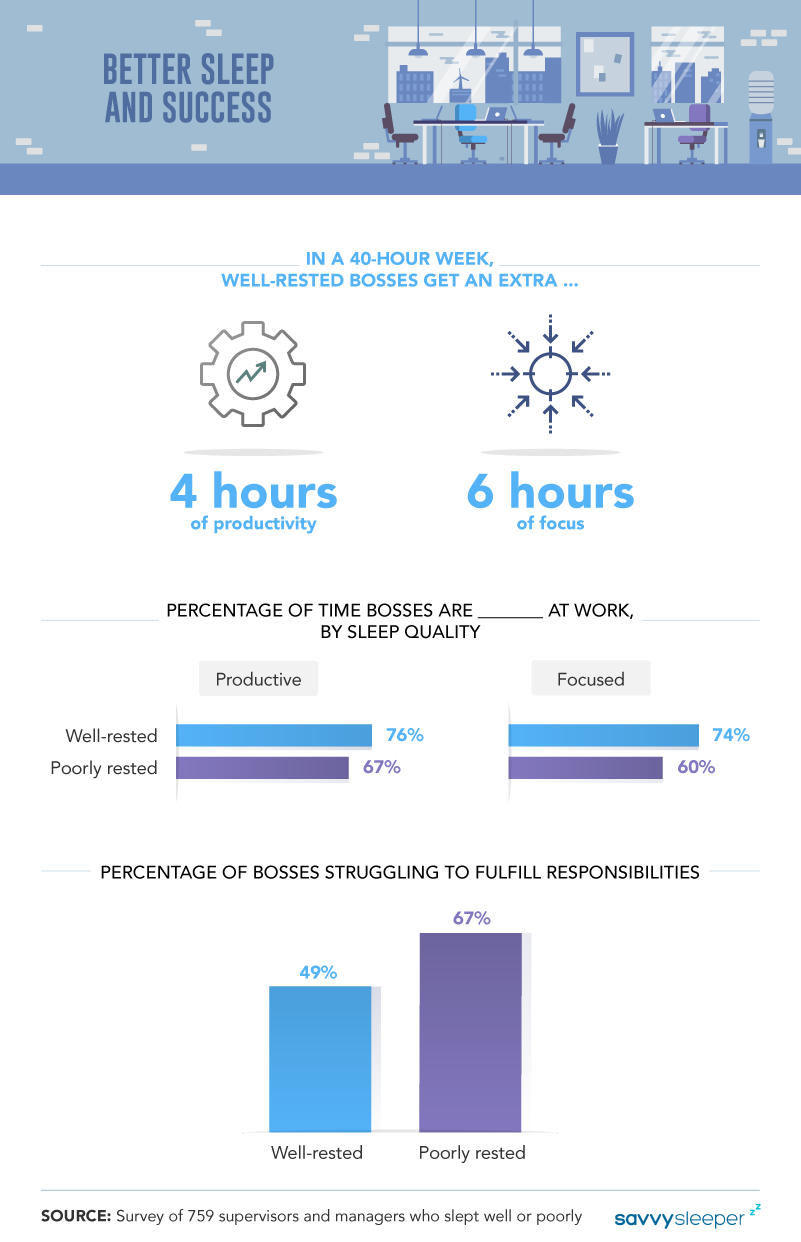 Getting a good night’s rest can make a big impact on improving our “executive function,” which is the set of skills that helps us excel at work or school. This connection might begin to explain why well-rested bosses enjoyed an extra four hours of productivity and six hours of focus at work based on a 40-hour week.

Respondents who enjoyed a proper night’s sleep said they were productive for more than three-quarters of their workday, compared to just over two-thirds of the day among poorly rested respondents. A similar trend revealed itself when it came to maintaining focus.

The inability to focus on a given task starts with selective attention: When we don’t get enough sleep, our ability to filter out distractions and zone in on tasks (like focusing on a conversation in a crowded room) become impaired.

While far more people who struggled to fulfill their responsibilities at work fell into the “poorly rested” category (67%), another 49% of well-rested respondents also experienced difficulty maintaining their workload. So even though proper sleep can sharpen your cognitive skills and keep you on track throughout the day, being unable to stay on top of managerial duties seems to be a challenge for most bosses. 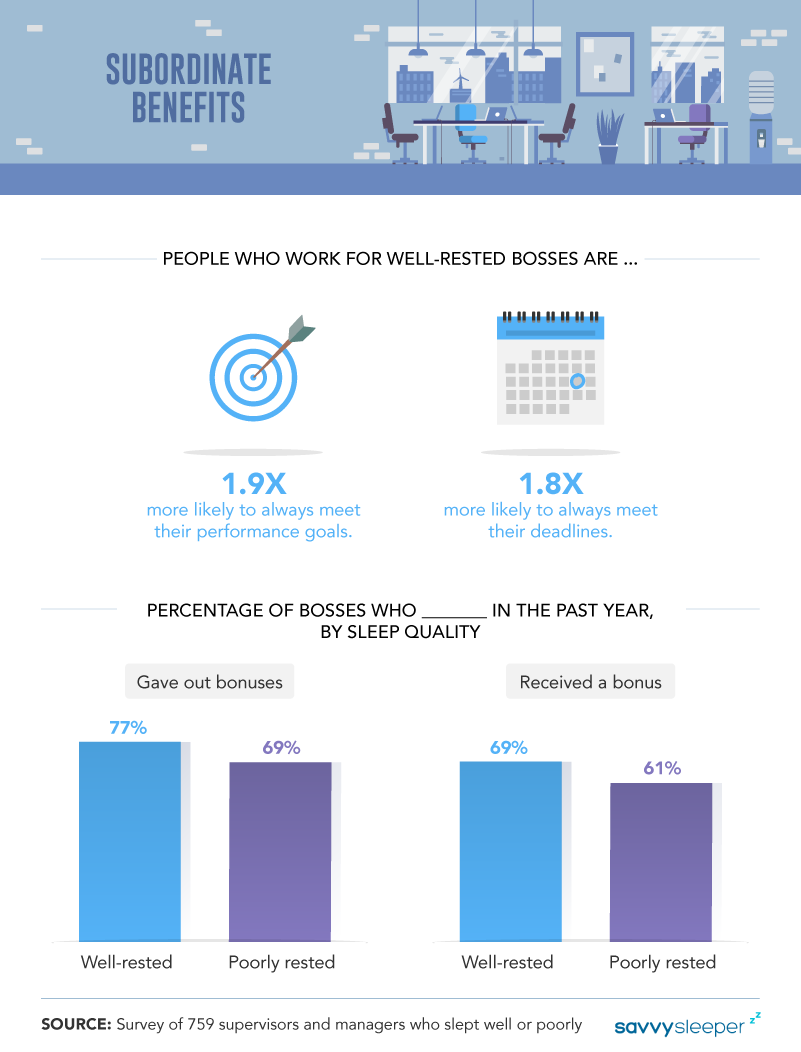 Happiness and productivity at work start from the top down. According to the findings we have discussed so far, well-rested bosses are good bosses, and good bosses foster productive employees. Our study found that people working for well-rested superiors were nearly twice as likely to always meet their performance goals and deadlines– productivity is contagious!

Our survey also linked a good night’s sleep to more bonuses all around: 77% of well-rested bosses said they had given out bonuses in the last year, compared to 69% of poorly rested bosses. The former group was also more likely to receive a little extra compensation themselves.

No matter where you are on the workplace food chain (and no matter how much sleep you got last night), there are ways for you to stack the odds in your favor if you’re working towards a bonus. Experts recommend documenting what you accomplish throughout the week and nurturing your relationship with your boss, among other things, to achieve your goal. 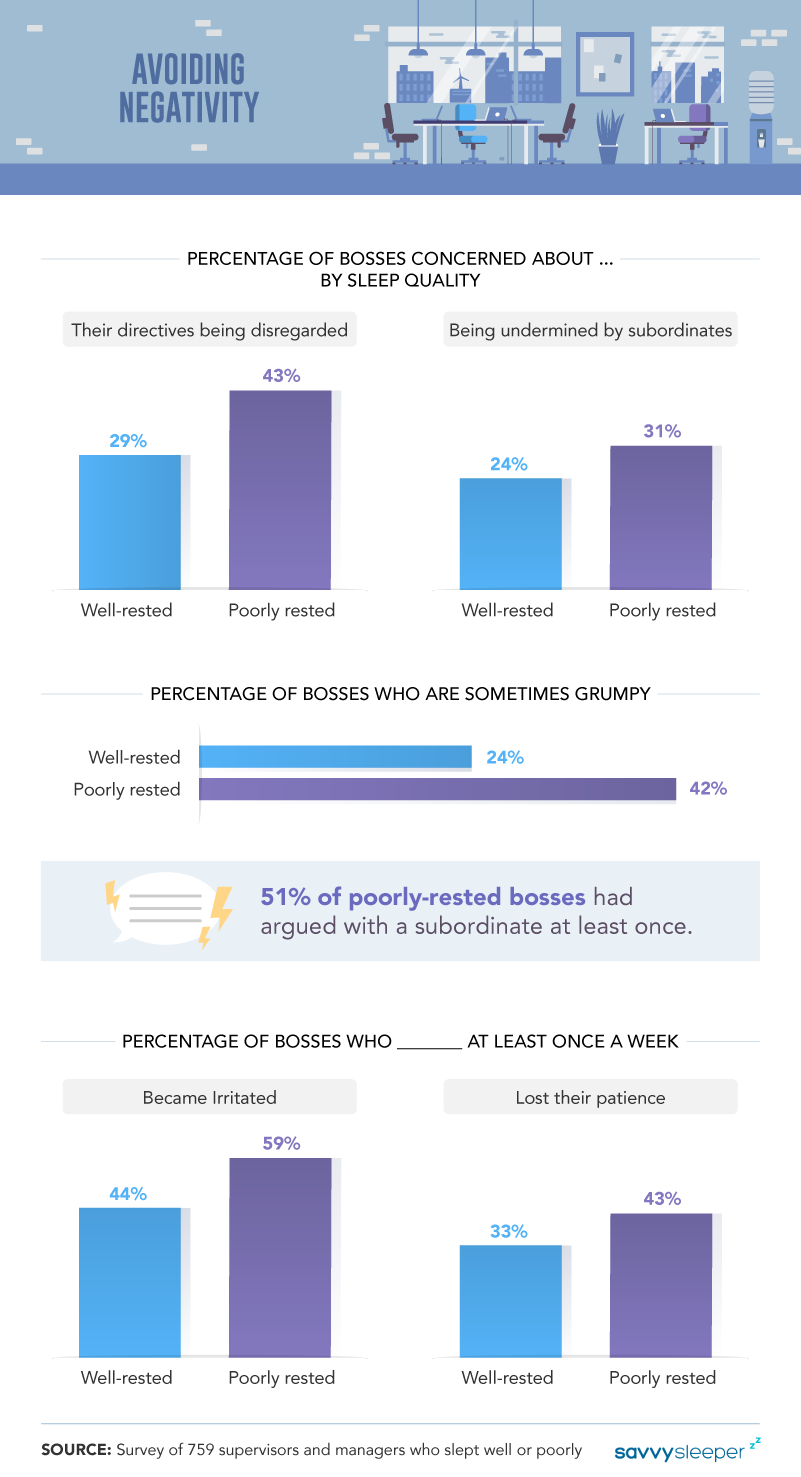 When we don’t sleep enough, our mood suffers: We overreact, we get grumpy, and we can actually develop serious health conditions like heart disease and diabetes. So based on these conclusions, rolling out of bed well-rested can also help adversity roll off our backs more easily.

Bosses running on a good night’s sleep were not only less likely to be concerned about their instructions being disregarded (29% vs. 43%), but they also weren’t as fussed about being undermined by their employees (24% vs. 31%). Additionally, a lack of rest nearly doubled the chances of respondents coming into work grumpy.

Anger, in particular, is an intense and worrying side effect of sleep deprivation. Our survey supported the connection between lack of sleep and moodiness, with poorly rested bosses reporting higher incidences of losing patience and becoming irritated in the workplace. More than half of under-rested bosses also reported arguing with a subordinate at least once. 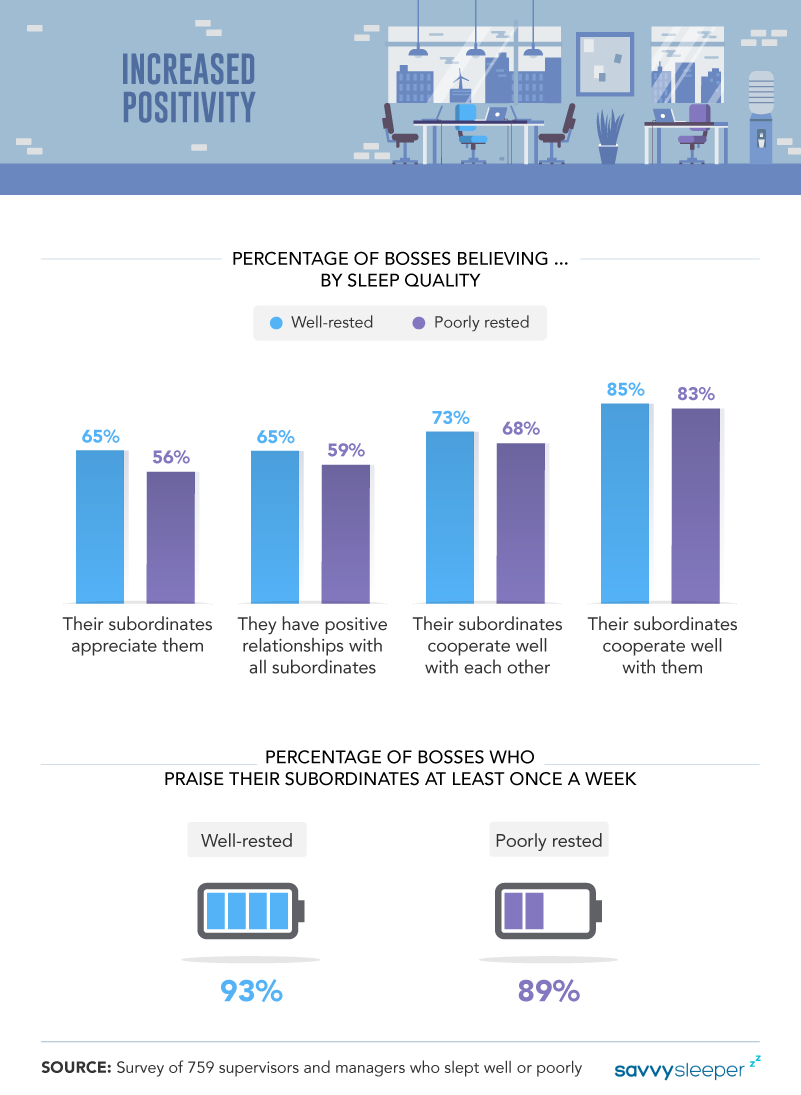 People who enjoy high-quality sleep have a better sense of overall life satisfaction – and for our respondents, in the context of their workplace, that translated to a rosier outlook on their relationships with their colleagues.

Well-rested bosses were more likely to feel like their subordinates appreciated them, cooperated well with them, cooperated well with each other, and had a positive relationship with the superior in question. These feelings of social satisfaction also proved to be contagious: 93% of well-rested bosses said they praised their subordinates at least once a week (compared to 89% of poorly rested bosses, which is also impressively high).

The fact that well-rested and poorly rested superiors alike prioritized employee appreciation paints an inspiring picture of the modern workplace. Receiving recognition at work is the foundation of a healthy team, leading to higher retention rates, happier employees, and more holistic working relationships.

Even if you’re not in charge of a team, you’re still the boss of your own life – and that means you need restful sleep. Managers who got more sleep were friendlier, more focused, more energetic, and better able to cope with stress at work than their poorly rested counterparts. They also had sunnier outlooks on their relationships with their subordinates. In turn, employees who worked under well-rested bosses were higher-performing and better appreciated.

Doesn’t that sound like a wonderful way to spend your workweek? Whether or not you’re the boss, a good night of sleep can make a big difference in your workplace performance. At Savvy Sleeper, we’ll help you find the best mattress to score high-quality sleep, helping you be a rock star inside and outside the workplace.

For this study, we surveyed 5,350 people in total. Among those respondents, 1,887 had positions where they supervised or managed other employees. For a majority of our analysis, we looked specifically at a sample of 759 respondents who slept notably well or notably poorly. To ensure we accurately analyzed the topic, respondents who only slept “slightly well” and “slightly poorly” were not included in our groups of well-rested and poorly rested respondents. Among this core sample of 759 respondents, 269 were female, 290 were male, and three did not identify as either gender.

To ensure that all respondents took our survey seriously, each respondent was required to identify and correctly answer an attention-check question. In many cases, questions and responses have been rephrased for clarity or brevity. For statistical accuracy, outliers have been removed where appropriate. These data are intended for entertainment purposes only and rely on self-reporting. Potential issues with self-reported data include but are not limited to: exaggeration, selective memory, and attribution errors on the part of respondents.

If you find this information interesting and believe your audience will as well (or if you’d like to hint to your boss that he or she might need a bit more sleep), then please feel free to share this study for noncommercial purposes. All we ask for credit is that you link back to this page so that readers can check out all of the information for themselves.